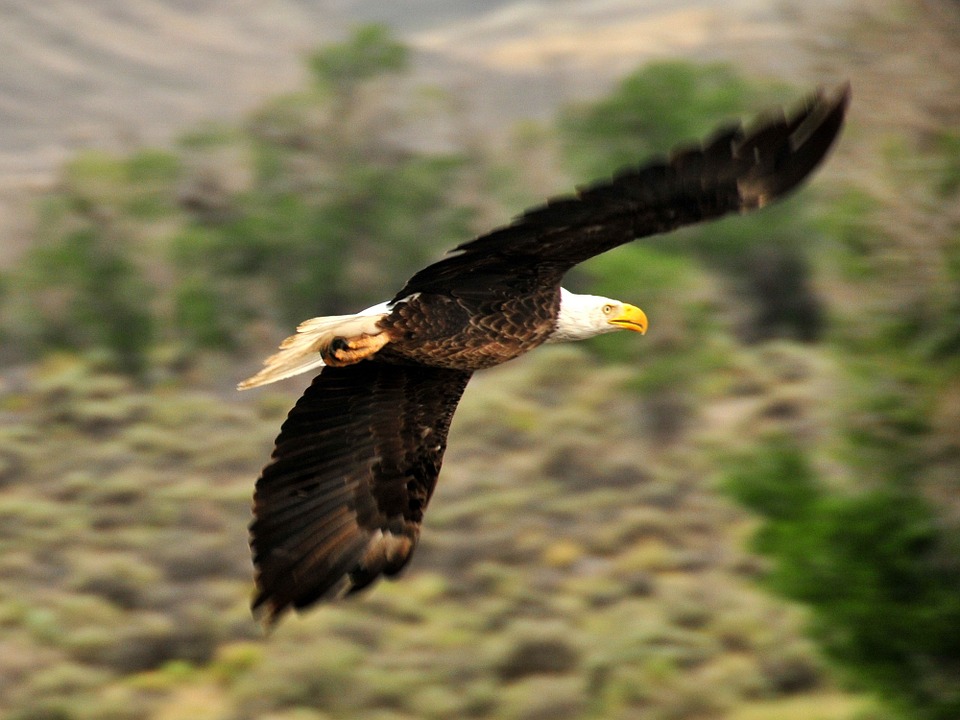 As the FSC system grows, so does the potential for false claims and labels. FSC’s answer is the Online Claims Platform (OCP), a system enabling users to record and confirm their FSC transactions online. If strong buy-in from the industry can be secured, the OCP may vastly reduce the risk of fraud and errors. Despite serious obstacles, constructive dialogue may be paving the way for a solution.

From a market perspective, FSC is an eco-labelling success story.  Today, there are nearly 30,000 FSC certificates issued in over 100 countries. But whilst this is a positive sign that the world is heading towards sustainable timber products trade, there is a potential downside to this development: The success of FSC also spells a fast growing potential for errors and fraud leading to sales of products that are labelled “FSC” on an illegitimate basis.

This is why FSC launched the Online Claims Platform (OCP) to radically reduce the possibility of false claims.  The OCP constitutes an efficient means of controlling certified material volume flows between companies.

Currently, business to business transactions are not checked as part of the FSC auditing routines. This leaves the door open for certain types of fraud. For example, it is possible for a certificate holder to issue false invoices for non-certified material selling them as certified, thus boosting their ‘certified’ trade on an illegitimate basis, whilst the copy of the invoice shown to the auditor has no FSC info.

Today, no-one is checking whether there is a match between the volumes registered as FSC sales and purchases by A and B, respectively. In the current system, the mismatch between these claims will thus normally go unnoticed by the FSC auditors.They will only verify the internal mass balance - FSC inputs versus FSC outputs - for the individual company: 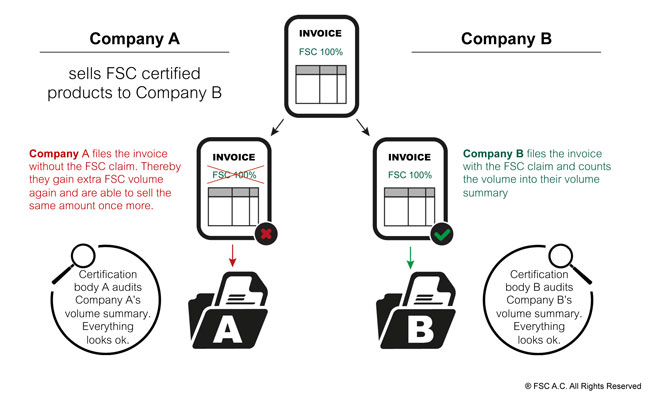 The challenge then is to seal this gap in the FSC system without causing new problems. This is what the OCP is intended to do, whilst providing for additional benefits such as streamlined auditing and reduced requirements for documentation.

In the OCP, buyers report traded volumes of FSC products online, whilst the supplier confirms the claims.  This enables double-checking and confirming claims in near real time.

After initial presentations and discussions, the certified industry in Europe and amongst the paper sector quickly cooled down towards the OCP.  Over time the negative attitude became quite widespread, as reported in the March 2014 ETTF Newsletter.

Head of Sustainability Anand Punja of the UK Timber Trade Federation has been a leading critical voice in the debate.  According to Mr Punja, the pushback from the industry was mainly due to a lack of proper dialogue.

“At first FSC seemed to just plough ahead with a project that would have massive impact for businesses on the ground and not proportionate to the risk involved”, he says. “Had our concerns been heard and taken into account from the beginning, we’d be in a different place today”.

According to Mr Punja, the top concerns for industry concerns data security and unclear liability for financial losses of commercial data.

Timber companies fear that massive online data exchange might open the avenue for internet crime such as hacking of confidential supplier information.

The TTF and other European industries were also concerned that the OCP would be made mandatory for all users, imposing undue burdens and risks on all FSC certified companies. Instead, they urged a risk-based approach to tackling the problem where risks of them occurring are highest.

As the industry especially in the UK and amongst the paper sector became aware of the OCP and FSC’s intentions to make it mandatory with little consultation, they started to co-ordinate and voice their opinions. FSC took stock of the issues raised and started to look at potential adjustments of the OCP.

FSC Systems Integrity Director Phil Guillery is heading the OCP development process. He explains: “Initially, the idea was to make the OCP mandatory for all FSC certificate holders. This would have led to the strongest possible protection of the system’s credibility and would enable maximum streamlining benefits.

However, after listening to the industry, FSC and its International Board of Directors has just recently decided to follow a different route and make the use of the OCP voluntary. We simply realised that one size will not fit all and while we still consider the OCP to be a strong tool, we will not force companies to use it. If they believe that they have other methods which will credibly deliver claim verification as the OCP does then these will be accepted”.

He adds: “This does not mean that FSC is willing to compromise our integrity. Quite on the contrary we are enforcing our need for strengthening our system by introducing new criteria on claim and volume verification in our coming revised chain of custody standard. But at the same time we have chosen to listen to stakeholder concerns and allow flexibility in how certified companies choose to meet these new criteria."

In addition to amending the concept, FSC has continued its efforts to build a constructive conversation with the industry. According to Mr Guillery, FSC has intensified their dialogue with the industry during the past months, debating the pros and cons of the system and carefully listening to concerns.

This may have resulted in a shift in the industry’s opinion: “In March 2014, a survey conducted by FSC showed that FSC National Offices estimated that as many as 75% of industry representatives were against the OCP. By July, this had fallen to 50%”, he explains.

Mr Punja confirms that FSC’s latest signals have led the industry to reconsider their stance.

“We’re getting there”, says Mr Punja. “The fact that they’re re-assessing the system gives assurance that our concerns have been heard. The right messages are coming through now”.

Mr Punja points out that there are still topics to take care of before the TTF will recommend its members to test or use the OCP: “First of all, the system needs to factor in the security of data protection. Secondly, the Terms & Conditions that system users have to agree must make clear who has access to their data and who’s liable if the security systems fail and this data ends up with a competitor or customer. In addition, we need to understand the cost implications as the system expands”.

He adds that a former major stumbling block - that the system was to be mandatory for all – appears to have been removed.

Mr Punja recommends FSC to take a phased approach, in close dialogue with the users. “The speed of phasing this in is also important. Users need enough time to adjust”, he says.

“The bottom line is that we’re positive about re-engaging with FSC if they want to listen. Now they seem open to take a risk-based approach, which is sensible and can provide added value. I believe that a compromise solution is within reach”.

Mr Punja points out that the magnitude of the problem that the OCP will solve - false FSC eco-labelling and claims - is not known and where it is happening.

“We’ve reached a point where we’re willing to soften our stance. But we need to understand how big the risk is and, where the risks are - geographically and across which types of supply chains - in order to judge whether the OCP solution is proportionate, especially for European businesses that have already invested huge sums in putting into place systems to manage FSC”, he says.

“Industry is not convinced that the problems the OCP are trying to address are that big in Europe, which is why we keep asking FSC to show us the evidence.”

NEPCon Executive Director Peter Feilberg comments: “Hard core facts and figures shedding light on the proportions are hard to get precisely because we haven’t got an instrument such as the OCP allowing us to detect it. But representing an FSC certifier, I have seen enough cases to be convinced that FSC has a major issue here that needs to be taken seriously. Even so, I believe we’re only seeing the tip of the iceberg. Since there is no system in place to check business-to-business transactions, we only discover these types of error and fraud by coincidence. The risk of fraud evidently becomes many times higher as FSC expands in the most corruption-ridden regions of the world. It clearly needs to be dealt with to protect FSC’s integrity”.

The same level of concern is shared by Alistair Monument, FSC Pacific Regional Director in Asia:  “Essentially if we don't have the OCP soon, we can no longer guarantee that the label will be credible”, he says. “The amount of fraud and document misuse in Asia and elsewhere is unmanageable with our current system, even with additional resources from ASI etc. We are increasingly hearing of a strong market for fake FSC invoices.”'

The OCP is expected to be one of the key issues up for debate at the upcoming FSC General Assembly 7-13 September 2014.

Mr Feilberg says: “Although the concerns are not without basis, I predict success for the OCP in the end, based on strong collaboration between FSC and the industry. The issues that it helps to solve are much too serious to ignore – there is a clear need to address this gap in the FSC system. The OCP may not be perfect, but it is too good to be buried.  Other industry sectors have for many years been using similar online tracking systems as a natural part of their business”.

He adds: “If the OCP fails, some other similar system will need to fly. FSC can’t afford to ignore credibility issues that will only be growing as the system spreads further”.

About the Online Claims Platform

The OCP is an online system for buyers and sellers of FSC products to exchange and confirm each other’s claims. In this way the OCP enables a streamlined double-check of claims, ensuring that claims made about a specific transaction are identical.

FSC customers can enter the FSC claim in one of three ways: either manually, or through an OCP pre-formatted spreadsheet or by linking their IT system to the OCP so that the information is collected automatically. Since the beginning of 2014, the OCP has been open for companies willing to participate anonymously. An estimated 250 – 300 companies are currently using the system. According to Mr Guillery, the feedback from the test users has so far been rather positive and revealed the system to be more user-friendly than anticipated.

> Learn more about the OCP