Ebony is black, right? The blackest of all the woods. Actually, that’s not entirely true.

For every ten ebony trees that Crelicam fells in a natural forest in Cameroon, only about one is black while the rest are streaked with brown. Yet the streaky wood is just as good quality as the black ebony – the only difference is its colour. So, in fact Snow White’s hair isn’t as black as you’d imagine from the Grimm Brothers’ description, but has some highlights in it.

"Skin white as snow, lips red as blood, and hair black as ebony."

Description of Snow White from the Grimm fairy tales

The issue with sourcing ebony is that most companies don’t use the streaky wood. Crelicam – a company owned by Madinter and Taylor Guitars – does. 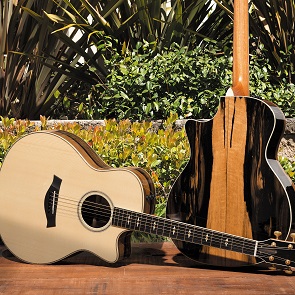 Madinter supplies wood to musical instrument makers, and has been persuading companies to buy their stripy, streaky wood and make it into guitars, violins, cellos and double basses to sell to consumers. In fact, the stripy instruments are becoming increasingly popular, especially for electric guitars, with some people now going out of their way to ask for this look. Marketing wood that’s usually left in the forest to rot is just one of the things they’ve been doing to use the natural resource responsibly – they also have an FSC chain of custody certificate from us, and are engaged in several other initiatives - see their website for details.

Madinter is the only company that’s currently marketing streaky ebony. The European Commission just awarded them a prize as part of the 2016/2017 European Business Awards for the Environment – they got first prize in Spain in the international business cooperation category and were runner-up across the whole of Europe. In 2013, the then-US Secretary of State, John Kerry gave Madinter and Taylor Guitars an Award for Corporate Excellence.