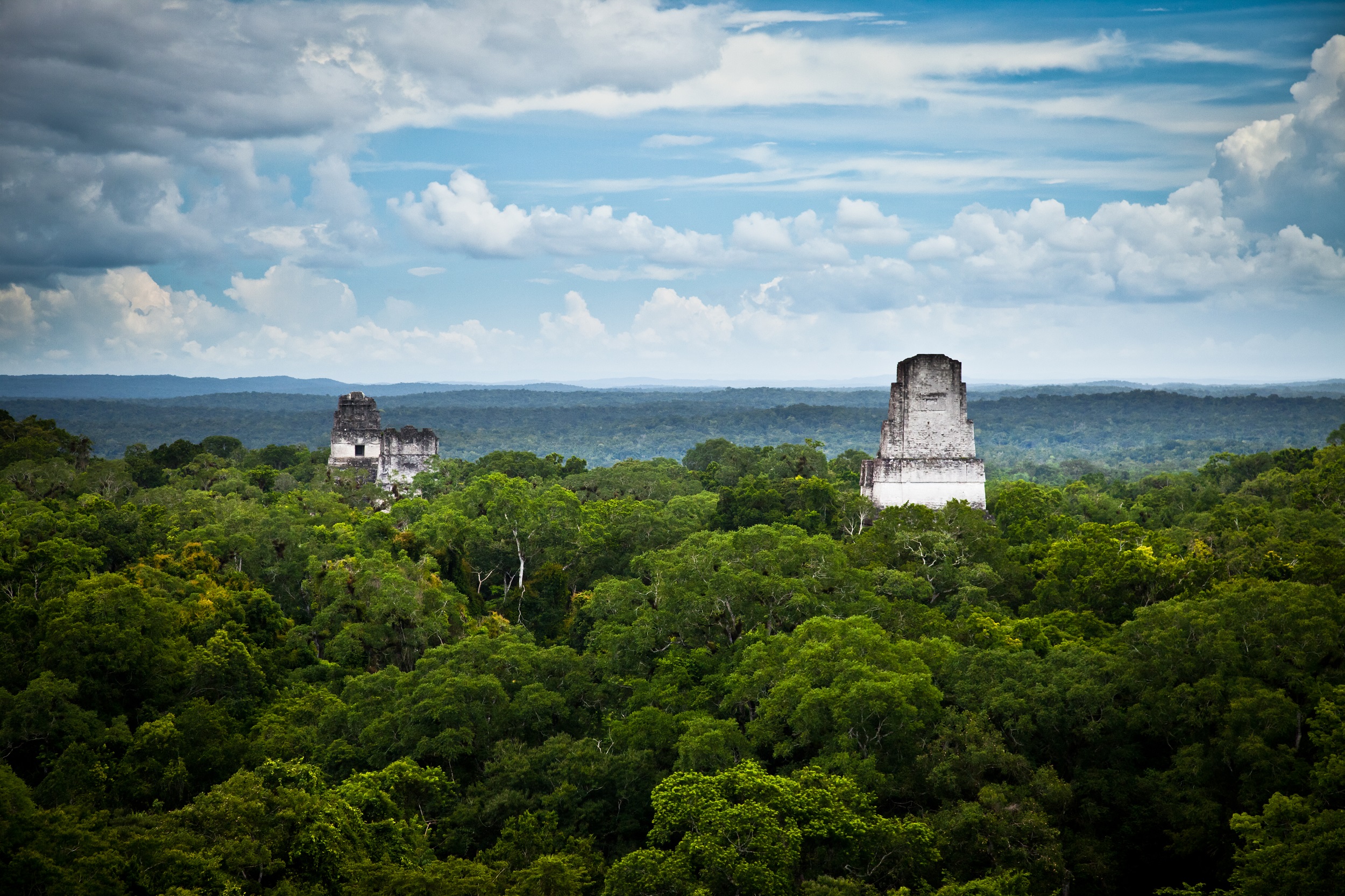 The Maya Biosphere Reserve is located in Guatemala’s northernmost territory. This Reserve covers 2.1 million hectares of land and it’s the largest protected area in Central America.

The Reserve and adjacent protected areas of Belize and Mexico constitute the heart of ‘Selva Maya’, making the biggest tropical forest area in the north of the Amazon. The Maya Biosphere Reserve has a vital biological and cultural heritage, providing a home to countless endangered species and even ancient Mayan archaeological sites dating back thousands of years.  One of them, the Tikal National Park, has been declared by UNESCO as both Cultural and Natural World Heritage Site; the site is also known for being chosen by American director George Lucas to film the planet Yavin 4 in the popular ‘Star Wars’ franchise.

These forests also serve as a critical carbon sink – a space which absorbs more carbon than it produces, an ecosystem essential to fighting the climate crisis. However, the Maya Biosphere Reserve is extremely vulnerable to deforestation due to its geographical positioning along a major drug smuggling route. Narcotraffickers are known to clear the forest to use as a landing zone on their journey from South America to Mexico and the US. On top of that, illegal farming and logging have also posed a serious threat to the Reserve, as people look to profit from the land.

In late 1990s, the Guatemalan government granted ten community forest concessions to the local communities for 25 years. This covered an area of approximately 400,000 hectares. The Core Zones make up 36% of the Maya Biosphere Reserve. Meanwhile, in the Multiple Use Zones (40%) and the Buffer Zones (24%), which comprise of the southern portion of the Reserve, certain regulated economic activities are permitted.

Each concession is operated by a Community Forest Enterprise (CFE) that responsibly extracts timber and non-timber forest products in accordance with the Forest Stewardship CouncilTM (FSCTM) standards. Till date, nine of the concessions remain active, occupying over 350,000 hectares.

Back in 2019, the Government of Guatemala, through the Consejo Nacional de Áreas Protegidas (CONAP), granted a 25-year extension to the Carmelita concession. This is a community located in the Multiple Use Zone of the Maya Biosphere Reserve and marks the first of the nine active concessions to have their contract renewed.

To win and maintain a forestry concession in the Maya Biosphere Reserve, the government requires FSC certification, which verifies that the forestry enterprises follow sound principles of sustainable forest management.

Asociación de Comunidades Forestales de Petén (ACOFOP) has been managing forest resources in Petén for over 20 years. Under this role, ACOFOP manages more than 500,000 hectares of forests located in the Multiple Use Zone of the Maya Biosphere Reserve. Through ACOFOP’s technical and commercial arm, Empresa Comunitaria de Servicios del Bosque, S.A. (FORESCOM), the community management units have been certified against FSC standards by Preferred by Nature.

The communities have adopted several sustainability measures to manage the forests granted. For example, less than one tree is harvested per hectare. They also develop annual plans that prescribe which trees are to be harvested and which should be left either for future harvest or to be protected as seed trees.

“No more than 10% of the forest cover will be harvested. This is a good measure in opening up the forest canopy and allowing regeneration of species,” said Glyde Hendrick Márquez Morales, a FORESCOM representative.

In the early days, timber harvesting focused heavily on mahogany (Swietenia macrophylla) and Spanish cedar (Cedrela odorata). Although these still make up a large part of the Maya Biosphere Reserve’s harvest volume and forest profits, the concessions have since diversified production. This is further fuelled by the increase in demand for lesser-utilised timber species such as the Santa María (Callophylum brasiliense), Pucté (Bucida buceras), and Manchiche (Lonchocarpus castilloi). These lumber sales have contributed immensely to the construction of a community school and provided scholarships for community members to study abroad.

To increase income while reducing timber logging, these concessions also harvest non-timber forest products. The Carmelita concession has been harvesting Xate, or palm leaves, that are typically found in Central America. This non-timber forest product is usually exported to the US for floral ornaments and offers valuable job opportunities to the women of the community. Of recent, the Carmelita concession has also started a pilot project to produce gum, or ‘Chicle’, paste.

Since the programme’s inception, it has created nearly 9,000 jobs and generated good revenue – resulting in a robust, local economy for the community.

The Rainforest Alliance has been working with these concessions since 1999. The relationship first began on certification and then transitioned to developing sustainable forest enterprises, which included extracting timber and non-timber products for export according to the strict standards of the FSC.

Last year, the Maya Biosphere celebrated their 30th anniversary. It was revealed that the responsible forest management practices have been proven effective. The Reserve recorded nearly zero (0.4%) deforestation rates, maintaining 70% of its conservation state.

As the local economy improved, the community members enjoy better wellbeing. Child malnutrition levels have significantly dropped while school attendance rates have increased. Poverty rates in the concessions are also much lower compared to other parts of Guatemala, making outmigration from the concessions communities a rare occurrence.

In regard to wildlife impact, over 1.5 and up to 11.28 jaguars for example were recorded per 100km2 – marking the highest reported value of this species in the country. The Maya Biosphere Reserve also recorded less than 1% of forest fire occurrences that impact the community forest concession areas.

According to Glyde Márquez, an annual awareness programme is carried out within the surrounding population and partners. This typically covers fire prevention and methods to safely use fire in agriculture activities. Forest fire prevention messages are also transmitted over the radio for maximum impact.

“Every year, boundary gaps between the main road management and cleaning units are cleared to remove the branches that have fell off along with other organic material. This is so the fire threats can be controlled,” explained Márquez.

Speaking further on forest management practices, Márquez shared, “In the management units, control and surveillance are carried out extensively – this prevents illegal logging from happening.”

From rainforests to the reimagined Brooklyn Bridge

After consulting dozens of committed conservationists, environmental organisations and forest experts, Pilot Projects identified the community in Uaxactún, a Maya Biosphere Reserve concession located in the Multiple Use Zone, as its ideal forest partner to supply the 11,000 planks needed.

Once the City approval has been obtained, supporters would be able to provide sponsorship donations and have their signatures inscribed at the end of each new plank. This innovative partnership model would not only provide a new boardwalk, but it will also help in protecting 18 acres of primary rainforest per plank.

Aside that, this project will involve cultural and education programming in New York City and with the Uaxactún community that can connect people across geographic boundaries and help drive interest and empathy that supports environmental and cultural sustainability.

On top of that, the Brooklyn Bridge Forest would also stand as a powerful symbol – backed by a petition of 11,000 supporters and stretching over half mile long – to tell world leaders it’s time to take immediate action on climate change.