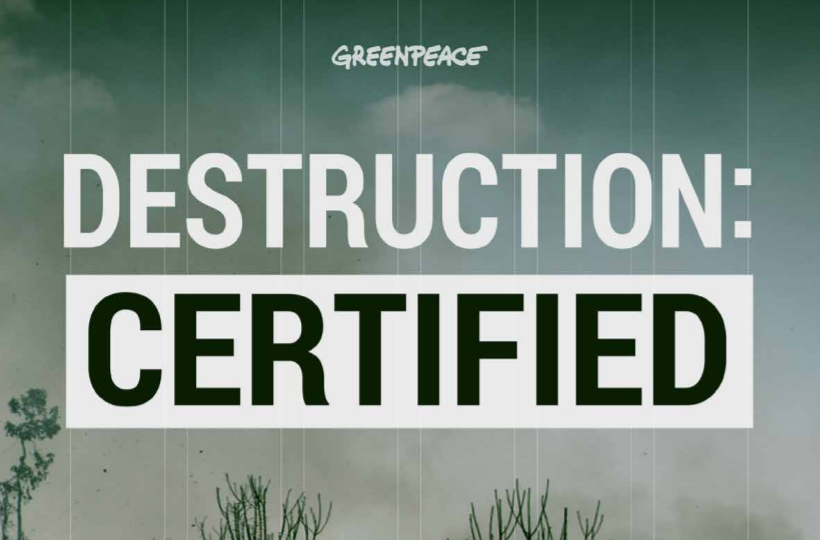 According to the report, which contains a scorecard marking most certification schemes with red crosses, Certification Schemes “enables destructive businesses to continue operating as usual […] actually increasing the harm caused by the expansion of commodity production.”

The 60-page report by Greenpeace, itself one of the original founders of the most successful of sustainability certification schemes, the Forest Stewardship Council (FSC), goes on to say certification is serving to greenwash businesses, that it “should not be relied on to deliver change in the commodity sector” and that the system of sustainability standards does not deliver any noticeable impact.

Unsurprisingly, the attack by the Rainbow Warriors on sustainable certification – a global business which has grown explosively over the last two decades - is causing a few raised eyebrows in the certification community.

Richard Donovan, who participated in the first working group responsible for developing the criteria and principles of FSC in the early nineties, is surprised by the aggressive tone of the report.

“It is ironic that Greenpeace doesn’t acknowledge that many of the things they want to happen are built into the certification systems: A clear decision against large scale conversions and deforestation, a balanced governing system, and virtually no cases in which FSC certified operations have deforested on a large scale. So, what is the problem? No system is perfect,” said Richard Donovan.

The weaknesses of sustainable certification systems are frequently highlighted in media reports and FSC is no exception: The FSC Chain of Custody standard, which contains a weakness allowing clients to manipulate documents, remain unchanged despite years of criticism. And some critics also see the leadership of the popular scheme as unresponsive and monolithic.

There have been plenty of reports about illegal timber ‘laundered’ through certification. Doesn’t Greenpeace have a point?

“Greenpeace doesn’t acknowledge that FSC really put tracking and tracing on the table. The idea that if you say something is sustainable, you have to track it back to the forest. Sure, there are challenges in doing that, but there are incredible innovation going on at the moment. It does not mean there is perfection, but Greenpeace should acknowledge the progress,” said Richard Donovan.

Shouldn’t certification be clearer and more outspoken about its limitations?

“Oh yes, but I think there is a bit of fallacy out there that FSC was invented for market reasons. That is not what drove me initially. The idea that someone at some time might buy products based on performance, great. But it wasn’t just market factors driving it.

“Greenpeace would argue for radical transparency, but do they make all their discussions and what they do transparent? I don’t think so. The classic to me is whether Greenpeace makes its financial audits of its organisation public. Then Greenpeace argues that companies shouldn’t use the same auditor every time. Well, does Greenpeace change its financial auditor every three years? If you are making prominent criticism like this, you better hold yourself to a high bar.”

Is there not a role for Greenpeace here?

“Absolutely. If you are targeted by Greenpeace, your first responsibility is to take from that and ask, ‘where can I improve?’ FSC didn’t respond [to the report] at first. Eventually they did, but they should have responded immediately,” said Richard Donovan.

Grant Rosoman, Global Forests Solutions Senior Advisor at Greenpeace, and one of the authors of the report, has been involved in work with FSC during the early days of the scheme.

“We were hopeful FSC was going to be a strong system and have invested a lot of work in it. The point when we realised it didn’t work was in 2008, when we did a major review of it and identified a number of weaknesses in the FSC. So, what we found is that a lot of these problems are still there, and FSC had become even more defensive and reluctant to change,” said Grant Rosoman.

He points to several other cases involving FSC certified companies deforesting in Indonesia, Papua, Sweden and in the Ukraine. In some cases, Rosoman says, FSC has not dissociated from these companies despite clear evidence of large-scale deforestation and corrupt practices.

How much room for imperfection in the system would you be willing to accept?

“We expect there will be the odd mistake. People are people and no system is perfect. But we are seeing too many mistakes. Because auditing is using a sample approach, you never know how bad things really are. What we are seeing could just be the tip of the iceberg. Take FSC Controlled Wood for example. The problems we found were massive,” said Grant Rosoman.

The senior GP advisor estimates that at one point, as much as 50 percent of FSC Controlled Wood coming through China and Vietnam was illegal despite carrying the FSC label.

“So yes, these may only be examples, but when you scratch the surface, you find a lot more,” said Grant Rosoman,

Do you acknowledge there have been improvements in the FSC system over the years?

“The standard has got stronger, that’s for sure. We don’t have that many issues with it any longer. Most of our issues today are with the implementation and other aspects, such as traceability and transparency. FSC invested millions into a transaction verification system, but only to have it blocked by the economic chamber, so now they are only doing piecemeal bits and pieces.”

Your report is pretty much suggesting that certification is useless and that the branding can even increase deforestation. While you are criticising others, what is your own long-term solution and strategy?

“I should point out that it is the work with the markets that Greenpeace and others have done that has driven companies to certification.”

So certification is part of your strategy?

“Yes. We are saying there is a role for certification, but a more limited one. People have to readjust their expectations to certification. When we discussed the report with the schemes before publishing it, many of them agreed that too much expectation had been placed on them. We are not saying ditch certification. We are saying keep it and strengthen it but be clear about its role - be very cautious and truthful about the claims it is making.”