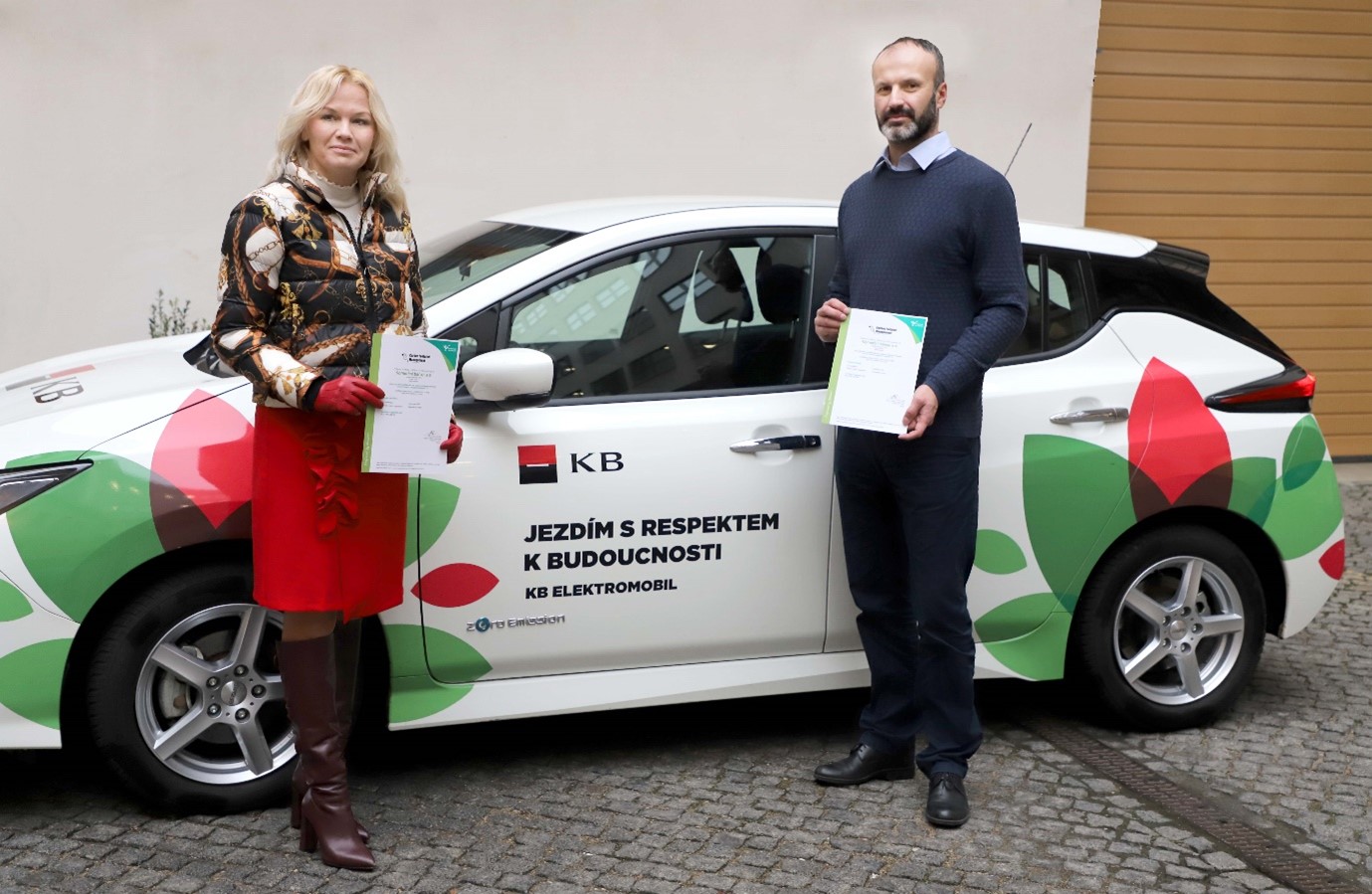 Reducing carbon emissions across operations and its facilities is becoming a priority for most organisations. Komerční banka, one of the leading banking institutions in the Czech Republic and in Central and Eastern Europe is jumping on the responsible business practices bandwagon and they strive to be carbon neutral by 2026.

(From left) Jitka Haubová, a member of the Board and Chief Operations Officer at Komerční banka, who is also the sponsor for Corporate Social Responsibility (CSR) and Sustainability and Roman Dolanský, the bank’s Manager of Support Services and Facility Management, holding the new Carbon Footprint Management certificate.

The plan includes a procedure for managing the company’s carbon footprint and targets for reducing carbon dioxide (CO2) emissions as well as an action plan for achieving the reduction over time within a specified period.

Where does its carbon footprint come from

The banking sector is generally considered as a low-stakes sector when it comes to carbon emission. However, there are still emissions to be cut down. Based on its carbon emissions data, Komerční banka’s emissions come primarily from its energy consumption and materials in these offices, emissions generated by employees commuting to and from their jobs. Business travel as well as branches construction and renovation are other sources of emissions.

Komerční banka has set a roadmap toward carbon neutral by 2026. This includes a series of measures including a gradual increase in the use of renewable energy through negotiations with electricity suppliers and engaging with suppliers with a recognised, trusted certificate.

“There is a whole set of activities in the field of energy management, from installing more energy-efficient lighting fixtures, monitoring energy overconsumptions, to implementing energy saving measures,“ says Roman Dolanský, the bank’s Manager of Support Services and Facility Management. The bank aims to reduce at least 50% of its current total carbon footprint from electricity consumption by 2025.

Other efforts to reduce its carbon footprint include extending its home-office work culture, and preference for electric or hybrid cars when purchasing a new vehicle for the company.

“Activities that lead to the protection of the environment are now a natural part of our work”, says Roman. “We perceive it as necessary to contribute to slowing down the warming of the planet and stopping the devastation of the landscape.”

Roman explains the bank wants to cultivate an environment where the bank continues to operate without burdening the environment. “We believe that our action can inspire other important institutions in our market (to do the same).”

Michal Rezek, Preferred by Nature Regional Market Development representative in the Czech Republic says Komerční banka’s success is a major step and an important milestone for a banking institution in the country in active measuring and introducing clear reduction targets and making them publicly available. “We are pleased to work with the bank on achieving their carbon neutrality.”

We have developed a rigorous, transparent and easily applicable standard for companies to monitor and reduce corporate or product carbon footprint. Our Carbon Footprint Management Standard builds upon the leading requirements for greenhouse gas accounting and helps clients to gain long-term positive benefits while avoiding accusations of greenwashing.

>> You can learn more about carbon footprint management here.

All photos courtesy of Komerční banka

Why is sustainability required in the rubber industry?