In Kyrgyzstan – home to the world’s largest natural walnut forest – local people spend months each year collecting nuts. And such walnut trees play vital roles; not only to livelihoods but in the context of local biodiversity. 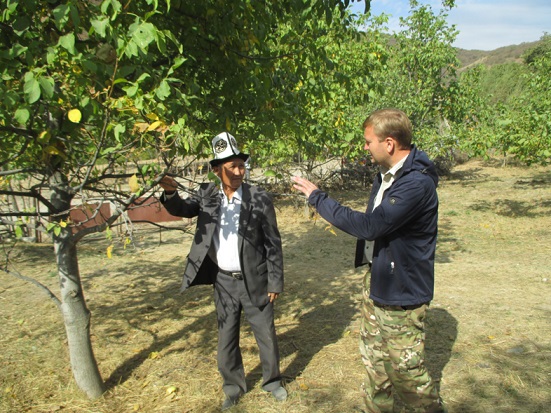 “We saw the nut forests of Kyrgyzstan for the first time in the summer of 2015. It is impossible to forget their beauty. For many local residents, these forests are the only source of income. Unfortunately, however, despite their hard work in the forest, people either could not sell their harvested products (mostly nuts) or traders would pay them very little”, said Roman Verin, Director of NEPCon Russia and CIS.

The Kyrgyz Association of Forest and Land Users (KAFLU) saw a solution in FSC certification; considering certification to be not only about enabling local harvesters to enter the global market and improving local livelihoods, but about sustainable use of natural resources, too. This, despite Kyrgyzstan being a completely new country for FSC certification.

In 2015 – with smallholder grant funding from FSC and the technical support of WWF Russia – KAFLU members started to prepare for certification. This included training local producers, as part of a pilot certification project, about the requirements of the FSC standards.

It took the group two-and-a-half years to build an FSC-compliant, sustainable forest management system. The group’s total area is about 300ha, with each forest management unit being, on average, about 5ha in area.

In August 2017, FSC and NEPCon released the Interim National Standard of Kyrgyz Republic. This standard is the first of its kind not only for Kyrgyzstan but also for the whole region covering Caucasus, Central Asia, Moldova and Mongolia.

The standard is applicable to timber harvesting companies. In this case in Kyrgyzstan, “This is a group certification of small forest concession holders who do not harvest timber but rather collect NTFPs – including nuts, fruits for drying, and honey. This group certification therefore has been considered as the Small and Low Intensity Managed Forests (SLIMF) type”, according to Nikolai Tochilov, NEPCon International Senior Auditor.

Another point of difference with the smallholders’ initiative is that there are no employees working in the forest. All activities are carried out by the forest concession holders – working as individuals – and their family members. Many FSC Standard indicators are not applicable to such specific forest management. “Our goal is to develop a new version of the Standard which would better relate to this unique smallholder situation and make the process of certification easier”, added Nikolai.

According to Roman, “During NEPCon’s FSC assessment, our team met a lot of people – in the state capital Bishkek as well as mountain settlements – all of whom expressed a genuine interest in FSC certification. We hope that this process will help maintain and improve the multiple high conservation values of these forests and positively influence the well-being of local communities.”

Another exciting outcome is the recent certification of the walnut processing and packaging facility; and the printing house in Bishkek, which will produce certified packaging for the Silk Road Taste nuts.